Sake has existed for more than 2000 years in Japan and the origins of sake can be traced in the Yangtse River Valley in China as far back as 4000 B.C. Sake came to Japan around 300 B.C. and it was the Japanese that started mass production of this delicious beverage. 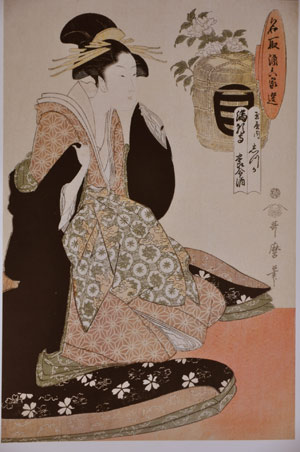 In the beginning of sakeâs 2000 year history in Japan the production was controlled. Sake was in the beginning brewed only for the Imperial Court in Kyoto, Shinto shrines and temples. 300 AD (Yamato Era) the Department of Sake was established in the Nara area. To ensure good harvest annual festivals were arranged and sake was offered to their gods.

The first known publication on brewing sake was written in the early 8th-century; Harima no Kuni Fudoki (âThe Geography and Culture of Harima Provinceâ). Harima is one of the oldest provinces of Japan. In 927 AD the law book , 50 volumes, Engi Shiki (âProcedures of the Engi Eraâ) described how sake was made at the Imperial Court.

Before it was known that sake could be produced by adding yeast and Koji (a mould enzyme) it was common in the early days that a whole village was involved in the process of making sake. "Kuchikami no sake," which means âchewing mouth sakeâ meant that all people in the village was chewing rice and nuts and then spitted the mixture in a community barrel.

Until the 10th century sake brewing was a government monopoly. For the next 500 years temples and shrines began to brew the main centers for production

During the Meiji Restoration (from 1868) , it was permitted by law for the Japanese to construct and operate their own sake breweries. Within a year close to 30,000 breweries opened around Japan. With ever higher taxes, the number of breweries after a few decades to about 8000.

Sake has been taxed for long by the Japanese Federal Government. In 1898 about 45% of the total direct tax income was from sake, 55 million yen out of a total of 120 million yen. Today this âgovernment incomeâ from sake is only about 2%.

In 1904 the Japanese Government opened the Sake-brewing Research Institute and a few years after wooden barrels were banned, instead enamel coated steel tanks began to be used. Through the centuries, common people around Japan started to produce sake despite ban both of the production and consumption. In 1904â1905, during the Russo-Japanese War home brewing of sake was banned by the Government, a law that remains in effect today. In 1905 sake still made up 30% of Japan's tax revenue.

During World War II the quality of sake gradually went down. When the government limited the possibility of using rice in the production alcohol and glucose were added which meant sake of poor quality.

Image: Woodblock Print of Kitagawa UTAMARO; Ãban nishiki-e is a famous sake brand, written on the sake barrel at right. One of a series of six prints, all associating famous sake brands and glamorous courtesans.